In May, 2019 FYE blew the minds of collectors around the world by announcing an exclusive line of Garbage Pail Kids merchandise including cereal, candy bars, and more! 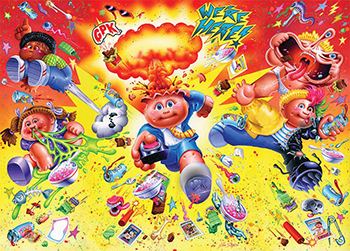 FYE is a leading specialty retailer of entertainment and pop culture merchandise in the United States and online, so OF COURSE it makes sense that they released a line of exclusive Garbage Pail Kids items!

After 30+ years of GPK items it seems like collectors have seen it all...but FYE blew everyone's minds with a unique and fun set of collectibles that are new to the brand. The packaging and promotion were fantastic, featuring lots of new artwork from veteran GPK-artist Joe Simko. Read below for detailed information and hi-res pictures of their entire 2019 release. 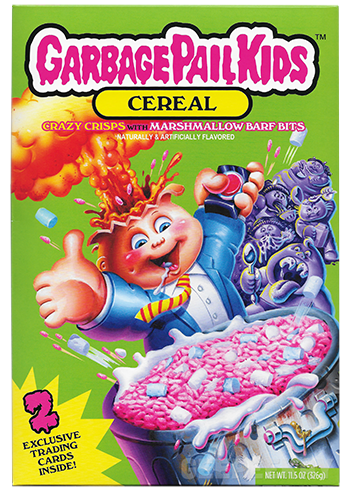 Without a doubt, the highlight of the entire release was the Garbage Pail Kids Cereal! Just one glance at that bright green box featuring Simko's all-new-take on Adam Bomb eating a bowl of "crazy crisps with marshmallow barf bits" and collectors were hooked. Each box sold for $12.99, and featured fun new artwork on all sides. It even includes some games and comics on the back!

And if that wasn't cool enough...just like any great cereal from the 80s this box came with a prize: 2 exclusive trading cards inside (see below)!

And because this is such a 'once-in-a-lifetime' item, it seems fitting to take a detailed look at the amazing packaging. Below is a detailed breakdown of the box showing how all the sides, top, and bottom fit together. Furthermore, below the breakdown image are small thumbnails of each side that can be clicked to open hi-res versions. Enjoy this detailed look at the Garbage Pail Kids Cereal from FYE! 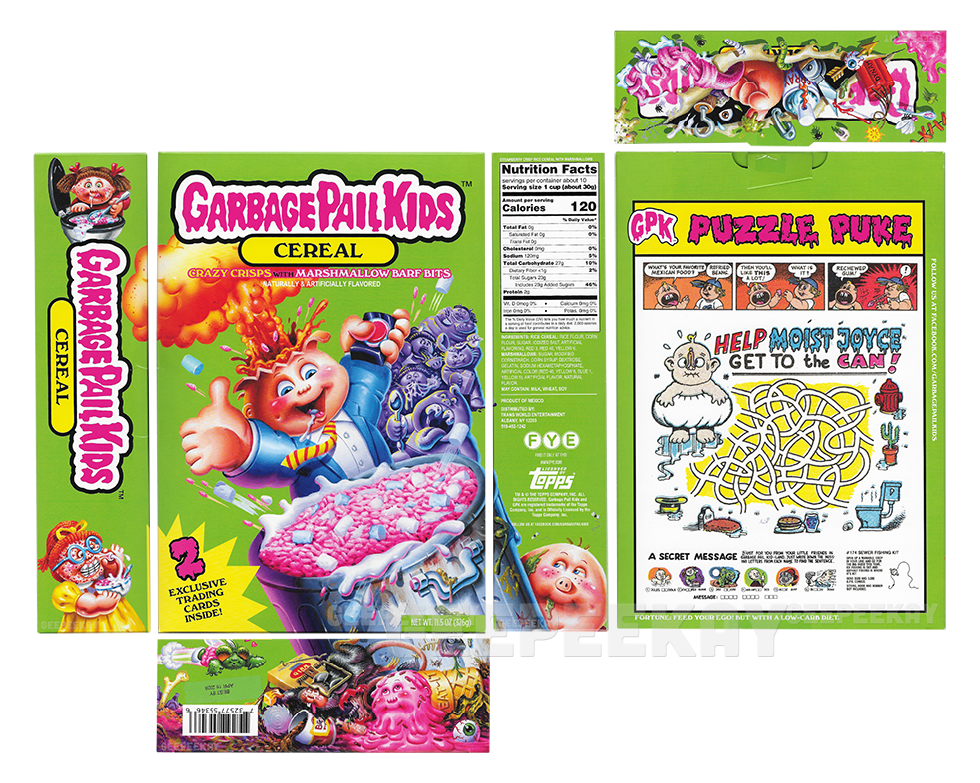 Apparently FYE had lots of cereal left over, because in late 2019 they released a Cereal Bar (12.31.19)! The bar contained a wrapper featuring a snippet of the cereal box artwork, and proved to be a great way to take your barf-bits cereal with you on the go!

On October 2, 2020 FYE surprised collectors with a mini 3-pack of Garbage Pail Kids cereal! The 3-pack of cereal contained two brand new cereals, and a smaller version of the previously-released 'Adam Bomb' cereal. 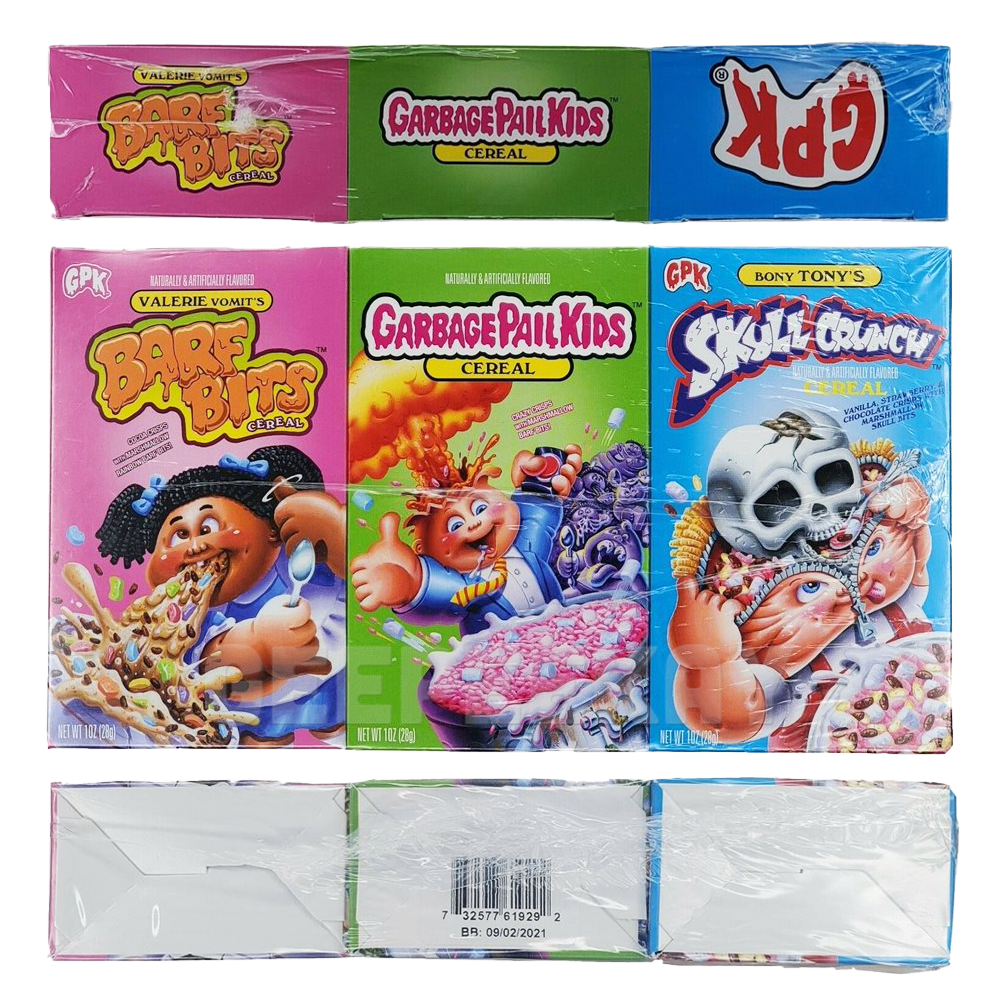 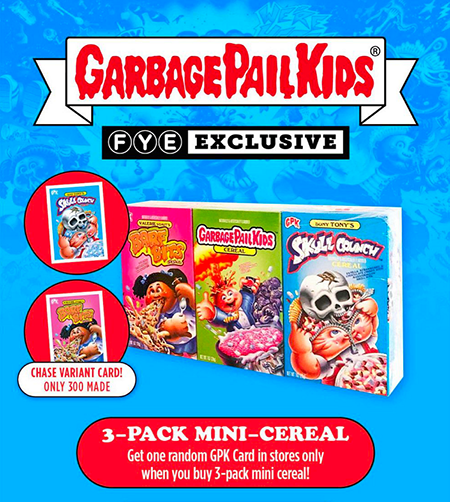 There were a total of four different trading cards inserted into the large cereal boxes (above), and all featured new artwork from Joe Simko. The cards contained puzzle backs that could be assembled to form a small puzzle depicting the front of the cereal box. Below is a gallery of the FYE x GPK trading cards: 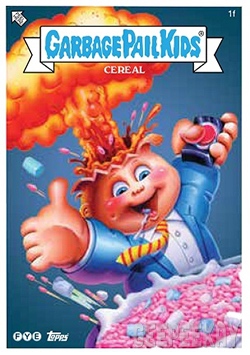 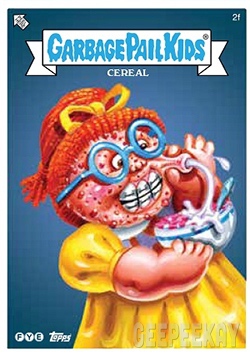 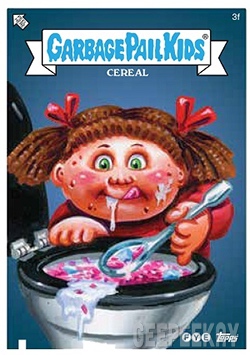 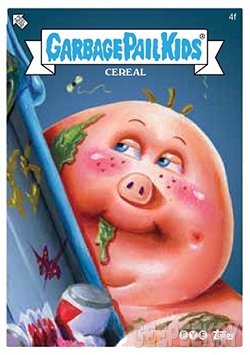 FYE released a Promo Card at both the 2019 NYCC (Barf-Bit Betty) and 2020 NYCC (Crispy Christy). They also handed out free trading cards with the purchase of the mini-cereal 3-packs. The 'Skull Candy' card was standard, but there were also 300 'Barf Bits' cards randomly inserted into the foil packs. Below is a gallery of the FYE x GPK Promo trading cards: 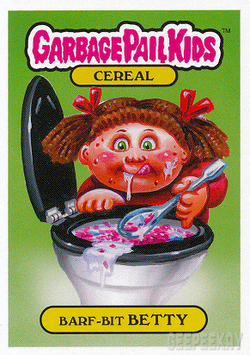 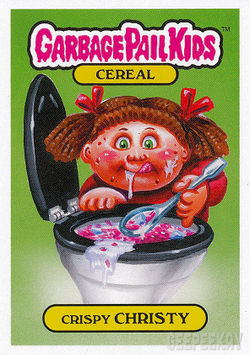 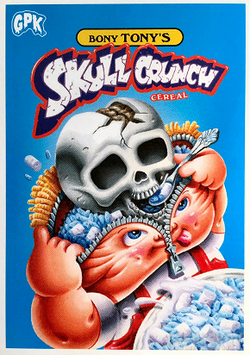 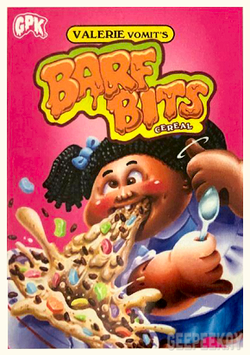 The first item to be spotted by collectors was the Garbage Pail Kids "Cherry Bomb" Energy Drink (05.03.19)! Without so much as a tease from FYE, pictures of the cans on store shelves started to show up online. Obviously people were in love with the idea of using Adam Bomb and GPK on an energy drink, and the fact it came in brilliant (Imperial Toy) blue packaging didn't hurt!
The artwork is not printed on the can, rather a 'skin' that contains the artwork is wrapped around the can. As for the cherry-flavored drink inside? Let's just say it packs a punch with sugars and calories galore 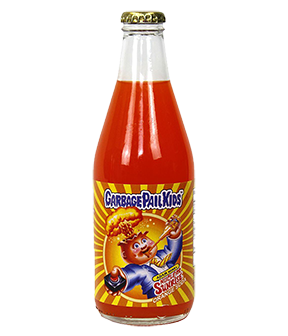 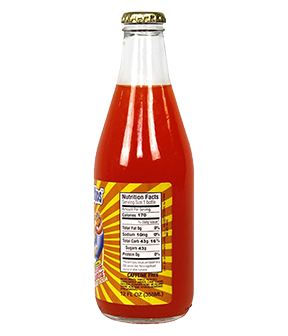 What collection would be complete without a couple GPK Candy Bars? Both bars sold for $2.99ea, and were only available in stores (largely-due to the difficulty in shipping chocolate without melting).
The 'Blasted Bar' featured Adam Bomb (or Blasted Billy) on the front, and advertised itself as a "cherry flavored popping candy milk chocolate". That's right...there is basically cherry Pop Rocks INSIDE the chocolate bar!
The 'Leaky Bar' featured Leaky Lindsay on the front and advertised itself as "green citrus frosting filled white chocolate". Yes...this chocolate bar was GREEN and had a green-goo inside that oozed out with each bite! 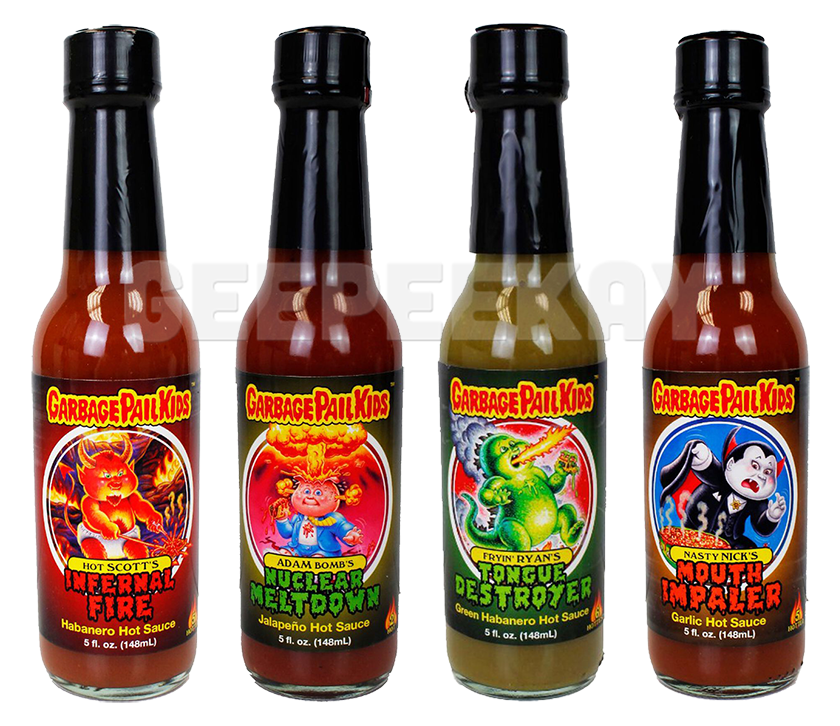 Each sauce contained unique 'Nutrition Facts', but honestly they are mostly the same, so I have only included one below as an example of what was inside the bottles

In May, 2019 FYE released an 'FYE Exclusive' Garbage Pail Kids T-shirt. This shirt featured artwork by Joe Simko that was also used on the store advertisement (top of page). 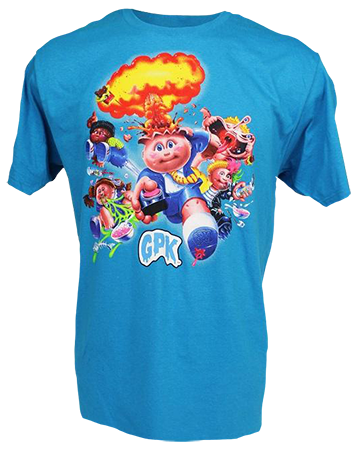 On December 17, 2019 FYE released the 'Garbage Pail Kids Ceramic Bowl with Spoon'. Commonly-referred to as a cereal bowl, this is actual more of a ramen bowl (notice the unique shaped spoon) 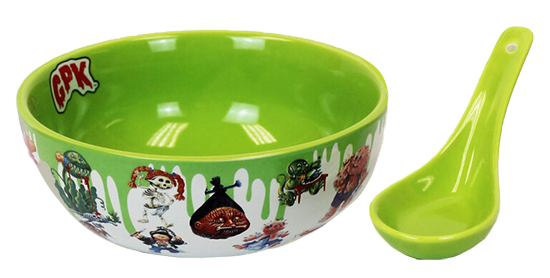 On October 8, 2020 FYE released the 'Garbage Pail Kids Sunshade'. According to their website the sunshade "Protects, cools, and blocks out UV rays. Universal size fits most cars, trucks and vans" 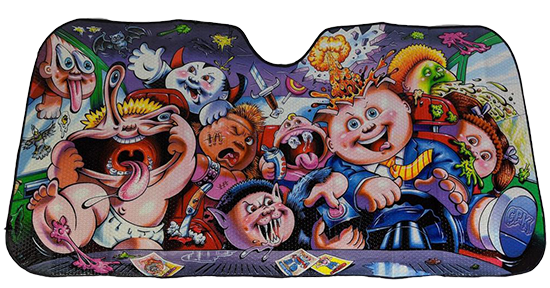