This page provides collectors with a comprehensive look at the different GPK CANDY & GUM released throughout the years. From gum to gummies - it's all here!

Back in the 80s you could snag a pack of trading cards and a stick of gum for a quarter! The smell was distinctive and the flavor was fantastic (for a few seconds). The downside, unfortunately, was the gum could (and would) damage the cards if left inside the pack. Regardless, this gum was included in every pack of Original Series Garbage Pail Kids.

Topps released their first mini figures in 1986 called Cheap Toys. These figures were packaged in a miniature garbage bag, and each package included a handful of 'Crummy Candy'. These 3/4" candy wafers came in four colors (purple, orange, pink, yellow), and included stamped GPK names on one side and the 'Garbage Pail Kids' logo on the other

Candy company Novo Bonbon released Series 2 of the Garbage Pail Kids Cheap Toys, and to differentiate from Series 1 they changed the crummy candy that was included in each garbage bag. The candy was still a wafer-type candy however it was now in distinctive shapes including a shoe, apple core, fish, dog bone, medicine, and corset?

The Series 1 Garbage Pail Kids Chewy Candies came in three flavors (cherry, grape, strawberry) and featured a total of 16 different characters on the wrappers. The candies came in a giant 'Adam Bomb' bag of 240 pieces and contained three unique wrapper variations (pink/green, yellow/purple, blue/red). Series 1 can be identified by using the straight 'drippy' Garbage Pail Kids banner on the bag and wrappers 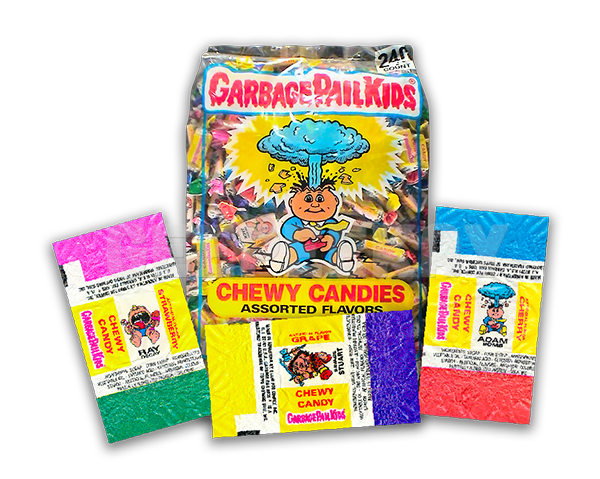 The Series 2 Garbage Pail Kids Chewy Candies came in two flavors (cherry, grape) and featured a total of 16 different characters on the wrappers. The candies came in a giant 'Brainy Janey' bag of 240 pieces and contained two unique wrapper variations (yellow/purple, blue/red). Series 2 can be identified by using the 'straight' Garbage Pail Kids banner on the bag and wrappers 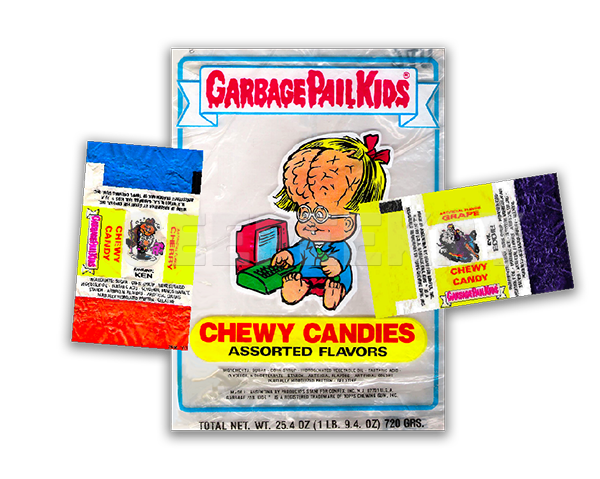 As part of the re-launch of the Garbage Pail Kids trading cards in 2003 Topps brought back the 'gum in every pack' concept. Using lessons-learned from the 80s they did change things up in an effort to prevent damage to the cards and packaged the giant green gum individually with a wrap-around trading sticker. The gum can be found with different codes stamped on them (E1, E2, E3, E4). This is believed to be related to quality control processes and not unique to different printing runs 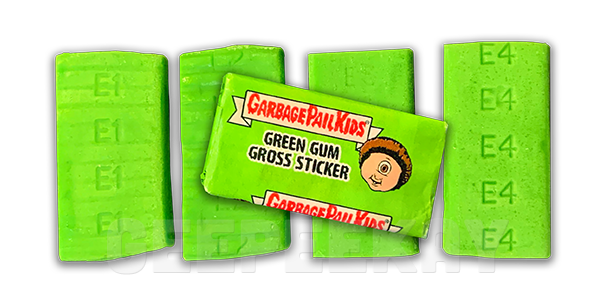 Similar to ANS6 Topps included a mega stick of bubble gum inside the All New Series 7 packs of trading cards. The gum measured roughly 1.5" x 3" and came individually-wrapped in cellophane

The Magnets release in 2012 was unique in a number of ways, one of which being the first-ever Garbage Pail Kids gummies! Each foil pack came with four magnets and two individually-wrapped gummies. There were a total of three different shapes to collect (severed foot, eyeball, heart) 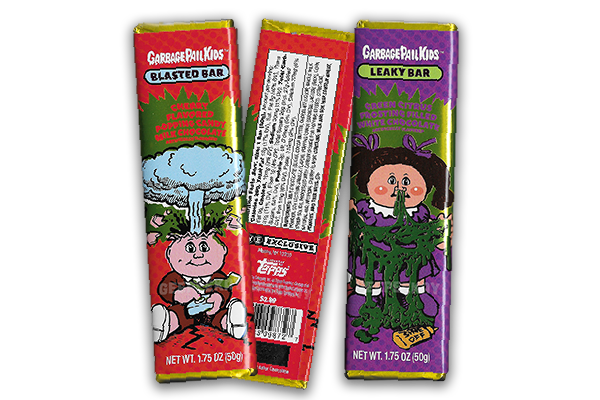